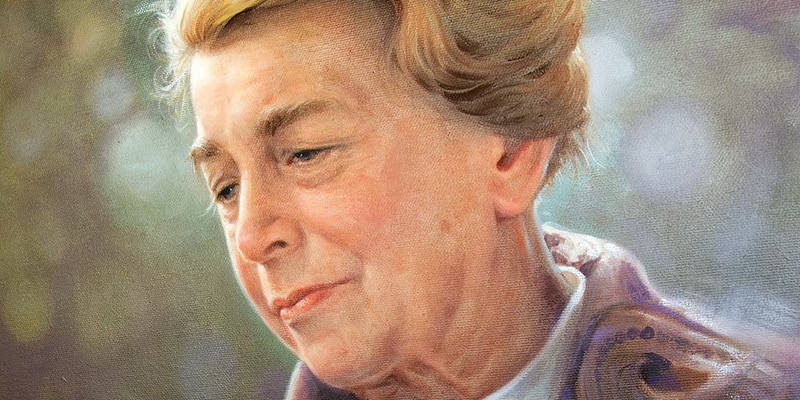 Maria Treben was born in 1907 in Žatec, Bohemia, then Austria-Hungary, the middle of three daughters of the owner of a printing shop who died when she was 10. After the Great War, the Sudetenland became part of the newly founded Czechoslovakia. In 1945, at the end of the Second World War, she and her husband Ernst Gottfried Treben were victims of the Expulsion of Germans from Czechoslovakia. For several years they lived in refugee camps until they found refuge in Austria and settled down in Grieskirchen in 1951.

As a young girl, her mother introduced her to the world of plants. When she met biologist Richard Willfort, she developed an eye for healing herbs. In 1971 Maria Treben wanted to make her knowledge public.

As her group of followers had grown enomously within a very short time, someone came up with the idea that she should gather together her advice and exprience in the book “Gesundheit aus der Apotheke Gottes” – Health Through God’s Pharmacy.

The first was translated into 24 languages and sold over 8 million copies.

Maria Treben addressed seminars and presented at natural health conferences in Germany, Austria and across Europe, attracting hundreds of people. She is perceived as a pioneer of the renewed interest for natural remedies and traditional medicine at the end of the 20th century.

Treben used traditional German/Eastern European remedies handed down from previous generations. She only used local herbs and always accompanied her remedies with advice on diet. She commonly used Thyme, Greater Celandine, Ramsons, Speedwell, Calamus, Camomile, Nettle and Lady’s Mantle. She treated a broad range of conditions from psoriasis to constipation and diabetes to insomnia.

She used her own recipes as well as traditional healing remedies like Swedish bitters that she used as a cure-all. Some of her remedies and advice proved to be controversial. To this day she is widely read and referred to for her knowledge of European medicinal herbs.

The fame worldwide Sweden Bitter got when it was created by the Austrian herbalist Maria Treben. She presented it in her book „Health through God’s Pharmacy”. Treben used the abbreviated formula of Paracelsus Swedish bitter , the right one which Dr. Claus Samst used, so-called „The Little Sweden Bitter“. It was a cheap elixir without many expensive and rare ingredients.

The Little Sweden Bitter is far cheaper and easier to make than origanal, although Maria Treben successfully treated dozen of diseases with it.

The original formula for Sweden Bitter from The Great Manuscript, so-called „The Great Sweden Bitter“, was created in the 16th century yet and was made by Paracelsus. According to that Paracelsus Swedish bitter formula, the most important ingredient is the ancient medicine Theriac, as well as the essence from plants and minerals which is treating, but it’s obtained from wine.